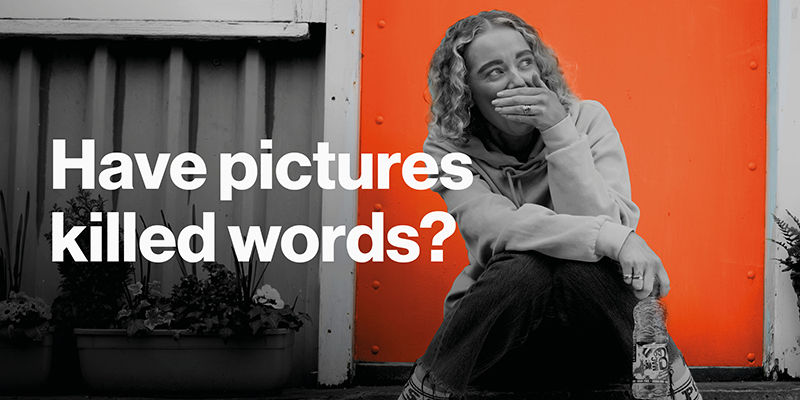 The quickest of Google searches around the topics of marketing copy being dead or pictures killing text in advertising will throw up some very compelling arguments to suggest that words, are on the way out. What does it mean for us as a society? Are we shifting more towards visual-dominated comms; sending pictures instead of texting, or retiring text heavy PowerPoints for information-rich image slideshows?

And what does it mean in marketing? Should brand writers start looking for new careers? Well, not to be hasty, we thought it only fair to dive a little deeper and offer Denvir’s very own “wordsmith” a chance to defend his profession. This is what he came up with.

Across the pond at the Massachusetts Institute of Technology, a team of MIT neuroscientists has shown that the human brain is capable of processing an entire image in just 13 milliseconds! This equates to our minds being able to process visuals 60,000 time faster than text.

It therefore stands to reason that any marketing messages communicated via an image will hit home for an audience up to 60,000 times faster than they would via text. Like we said, compelling stuff, and on the surface not a great start in defending the honour of the written word.

That said, the length of time over which these visuals are retained was not established as part of this study, leaving questions as to the effectiveness flash-fire marketing visuals would have in generating long-term brand recall. Could the extra time taken to process text-based comms be the key to promoting sustained recall? Perhaps not…

The fast track to brand recall

Let’s save length of exposure vs. longevity of recall for another day and focus instead on how our brains recall text vs. visuals. Sadly, for writers, the scales seem to tip even further in favour of images – thanks to a fast track connection to our long-term memory:

“Words are processed by our short-term memory where we can only retain about seven bits of information… Images, on the other hand, go directly into long-term memory where they are indelibly etched” Lynell Burmark, Thornburg Center for Professional Development

So, not only are visual marketing messages processed faster than text, they get to take the express lane straight to the promised land of long-term brand recall.

While the science points to images trumping words for both speed of processing and long-term recall, how does this stack up in real world marketing practice?

Social media is arguably the prime arena to examine for answers. Users generally have short attention spans, itchy scrolling fingers, and there is a flood of competing marketing noise from various advertisers. All of this plays to science favouring images over text, adding up to more bad news for ‘Team Words’.

Studies have shown that Facebook posts with visuals receive 2.3 times more engagement than text alone, while Tweets with images earn 150% more retweets. Ouch. Even in blogs, once the haven of the online written word, the impact of images is undeniable. In a study of over one million articles, blogs with an image positioned every 75-100 words received double the social media shares.

Strike three (more like four or five but who’s counting), marketing words and the careers of those who scribe them are clearly doomed… Well, maybe not entirely.

Picture a world without words

While images are processed more quickly and remembered for longer than text, the message carried by an image is far more open to interpretation. Pictures simply “cannot replace words in terms of their ability to convey unambiguous information” (Wired). In fact, people are shown to follow instructions 323% better when text and illustrations are combined.

Interestingly, companies such as Spritz have embraced our seemingly eternal need for text-based information. Rather than seeking to replace copy with images, Spritz has developed an innovative method to increase reading rates from 220 to over 700 words per minute – helping to close the gap between visual and text-based processing in terms of speed.

In terms of content, images alone cannot convince or educate an audience, rather they are recall triggers for things we have already experienced. A picture carries no ‘Call to Action’ unless the audience already has sufficient knowledge of what they are being shown. Take this advert for example: 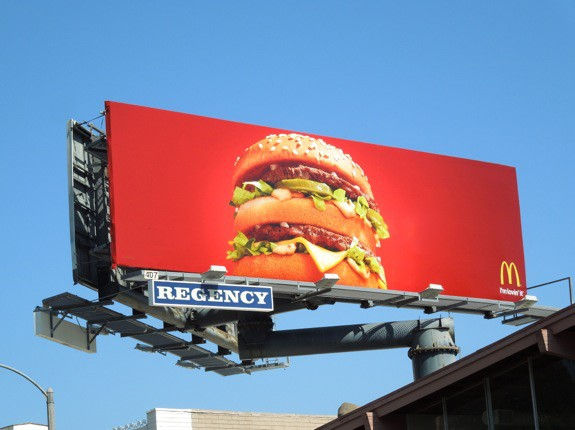 Seeing a Big Mac on a billboard, even with no supporting copy, our brains instantly receive the whole message and we are driven to act. We want one because we already know how a Big Mac tastes, we know we like it and we know how it will make us feel to have what is in the image. The image alone is enough. However, there are far more products which are not of Big Mac levels of lore than are – and they need copy!

Words: Don’t write them off just yet.

At Denvir, we believe the power of the written word is still very much alive – enhancing bold brand photography with compelling copy to ensure our clients’ messages are received, resonate, and are remembered by the target audience.

Below are some of our favourite examples, each with and without their headline copy. Which versions do you feel have the greater impact?

It seems clear from the examples above – at least until every brand enjoys the same renown as McDonald’s, Coca-Cola, Apple and alike – that marketing words and the careers of those who scribe them, are far from doomed after all.