Every creative has a metaphorical bottom drawer of old ideas that never came to be. This post is all about the tricky transition from a great idea in your sketchbook, to a great idea which becomes reality. But first, let’s take a look at the idea bit.

It usually goes something like this; a brief lands on your desk. You read it over and over again. Then you pick it apart and scour your mind for some ideas. Then the magic happens? Lightbulb moments aplenty? Sometimes, but not always. Sometimes you feel a vague sense of panic rising that you don’t have a decent idea. You’ve got creative block; lost your mojo. Time to throw in the towel, it was a good run while it lasted…

Then you revisit it, putting your first thoughts to paper and realising you’re not yet happy. They’re the same thoughts every other creative would have if they got the same brief. So you take another look, read the brief again and question it some more. You approach it from different angles, some interesting thoughts start to appear. Maybe there’s something in these ones?

Then, probably at a really inconvenient moment, in the toilet or in the car; bingo! An idea pops up right in front of your eyes. One of those where you get a wee rush of excitement, an eye-widening moment where you realise it has legs, it could work! So you quickly scribble it down before it flies away, never to be seen again.

Then you proudly develop it so it’s ready to share with your colleagues. You’ve cracked it! That’s the hard part, right? Wrong. The hard part starts here. Now you have to make it happen.

OK, you’ve got your awesome idea. You’re already on the stage picking up your shiny award. It’s went viral, you’re clients and colleagues are over the moon. But, none of all this matters if you can’t prove its potential to everyone else.

You’ve demonstrated that your idea answers the brief and could really work. If you’re lucky, everyone’s on-board and can also see its potential. However, there’s more you need to do.

Show how it can go beyond the brief. That’s what will make it exciting to everyone else. Maybe it’s just a press ad, but you show how it could work as a social media campaign and a quirky bit of ambient that no-one expected. Does it have the potential to be shared and go viral? Excellent. Show that.

Write a rationale for the idea. Arguably, if it works then it should speak for itself, but the rationale helps you articulate the idea and gives your colleagues the ammunition to sell it on to the client. Then you present it with the same passion you felt when you first had the idea. Your enthusiasm should be infectious. If you love it, there’s a high chance everyone else will. You can’t let the enthusiasm wane either. Make your idea robust and always refer back to what makes it great, this way everyone else will keep that enthusiasm that you have so strongly.

You’ve managed to keep your great idea intact and it’s time to produce it. Time to hand it over, kick back and bask in the glory, right? Not quite yet.

You might be working with others to bring the idea to life. Illustrators, photographers and animators may interpret your vision. You need to strike the right balance between micro-managing and letting them loose with your idea. In a healthy situation, you can trust each other to make the best of the idea. It is really important to make sure you are on the same page early on, then the only change that could happen is a positive one coming from the specialists you’re working with.

Your idea is now out in the real world. If everything has gone well, it is an immensely satisfying experience. The hard work has paid off and it’s a strange feeling of pride, relief, satisfaction and a wee bit of sadness. It’s done now and you’ll never get the buzz back.

There’s still stuff you can do though. Share it, photograph it for your portfolio, get samples and get access to stats on its effectiveness. All these things help make it more successful. It takes a lot to see a great idea through to completion. It takes enthusiasm, collaboration, energy, doggedness, and (though you may cringe at the word) selling. 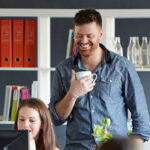